Kanazawa Castle stands in substantial park grounds in the center of Kanazawa City, and is just across the road from Kanazawa’s other big attraction, Kenrokuen Garden. The castle has played a central role in Kanazawa’s history and though once neglected, it has been extensively rebuilt and renovated in recent years.

The park itself is free to enter and parts of the castle can also be freely explored. For a small fee you can also enter some of the reconstructed buildings and learn how the castle was constructed as well enjoy the view from the castle windows. It is an essential stop on any tour of the city. 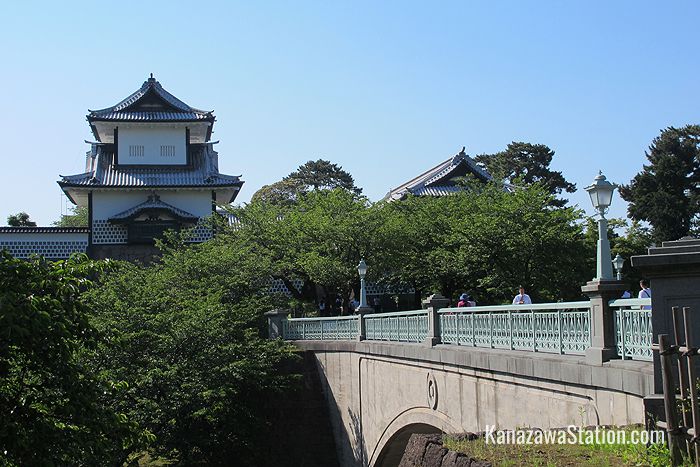 The plateau on which Kanazawa Castle now stands is a natural position of strength and it has been the regional center of power since the fifteenth century. At that time the old Kaga Province was controlled by an independent Buddhist state called the “Peasants’ Kingdom”. The stronghold of this kingdom was a fortified temple, called Oyama Gobo, which was built on the plateau in 1546.

In 1580 Kaga Province was brought back under the control of the central government, and Oyama Gobo was replaced with Kanazawa Castle. A general, Maeda Toshiie, was given control over Kaga, and his family ruled from Kanazawa Castle for almost three centuries. The Maeda family oversaw the building of most of the buildings in the castle complex, and the city of Kanazawa grew up around it.

As the Maedas prospered, so did Kanazawa city, becoming a center of culture famed for its gold and silver craftwork, lacquerware, ceramics, and silk. These glory years of Maeda rule are still regarded fondly in Kanazawa, and every June the Hyakumangoku Festival parade commemorates the first Maeda lord’s entry into Kanazawa Castle. 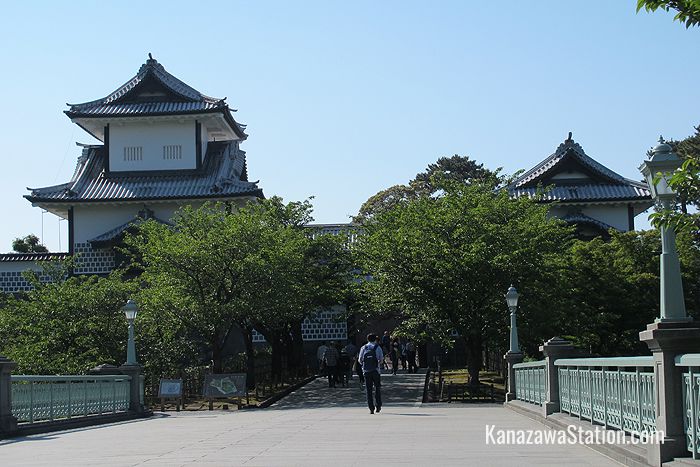 The Ishikawa-mon Gate dates from 1788, and is one of the few structures that survived the fire of 1881

Over the centuries the castle suffered repeatedly from fires and later from neglect. The castle tower burnt down in 1602 and was never replaced. In the Great Kanazawa Fire of 1759 the castle was almost completely destroyed and had to be rebuilt, and several buildings were again lost to fire in 1881. In the early 20th century, the castle grounds were occupied by a military barracks, and the castle moats were filled in. After World War 2 public tennis courts were constructed on the castle grounds, and Kanazawa University had its campus on the site until the 1990s. Happily, local government took control of the site in 1996, and since that time many of the castle’s buildings have been rebuilt and a portion of the moat has been restored too. Today Kanazawa Castle has regained its rightful place as a proud symbol of the city’s heritage.

In Maeda times the Kahoku-mon Gate would have been the main entrance to Kanazawa Castle. The original was demolished following the fire of 1881, and this reconstruction was built between 2007 and 2010 using historically accurate materials: a wooden framework, with outer stone walls, finished with white plaster and topped with a lead-tile roof. The reconstruction of all the castle buildings is based on painstaking research of old documents, photographs, and archaeological finds, as well as relying on traditional local construction techniques. 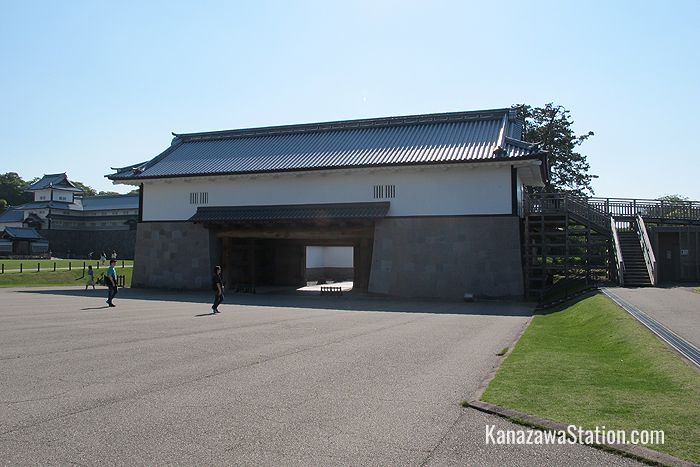 Inside the gate there are some displays relating to its history and construction. Entrance is free and it is open from 9.00 till 16.30 with last entries at 16.00. 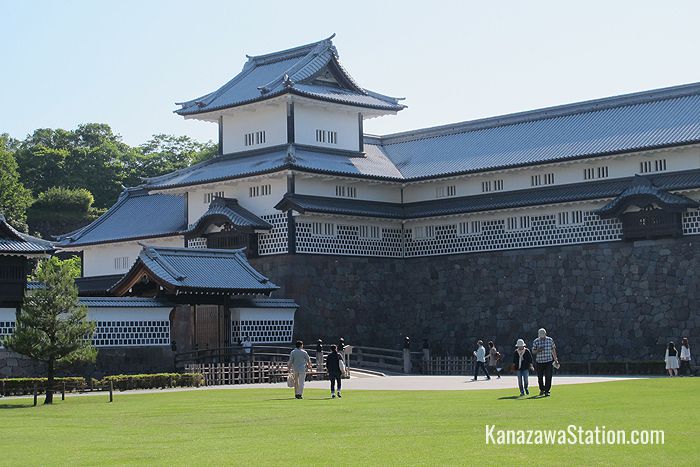 Beyond the Kahoku-mon Gate are two turrets and a storehouse that runs between them. These were reconstructed between 1999 and 2001 and form the most impressive part of the castle complex. To enter them you need to pay a small fee, but it is well worth it to see the extraordinary interior carpentry, the display models and artifacts, and to enjoy a samurai’s-eye view from the turret windows. 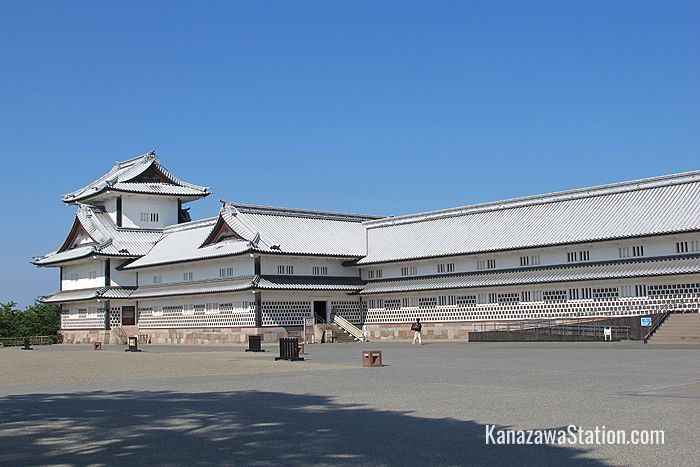 The entrance to the Gojikken Nagaya storehouse. The turret at the far end is called Hishi Yagura 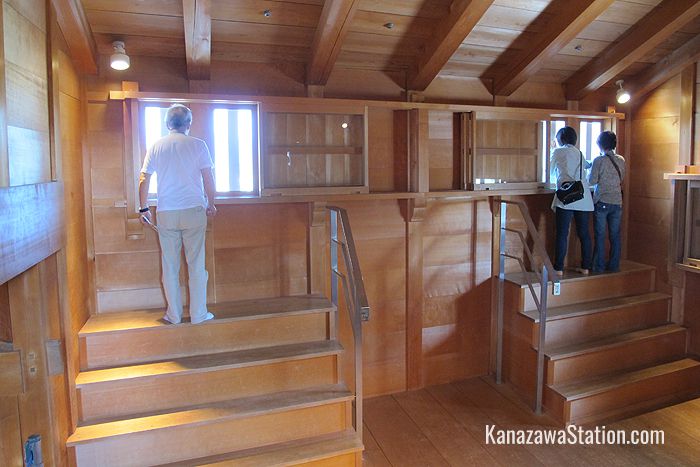 Taking a peek from the “stone-dropping” windows 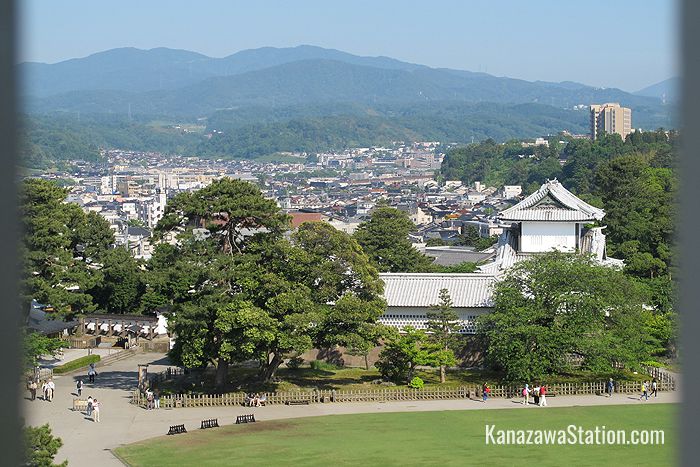 A view from the Hishi Yagura turret 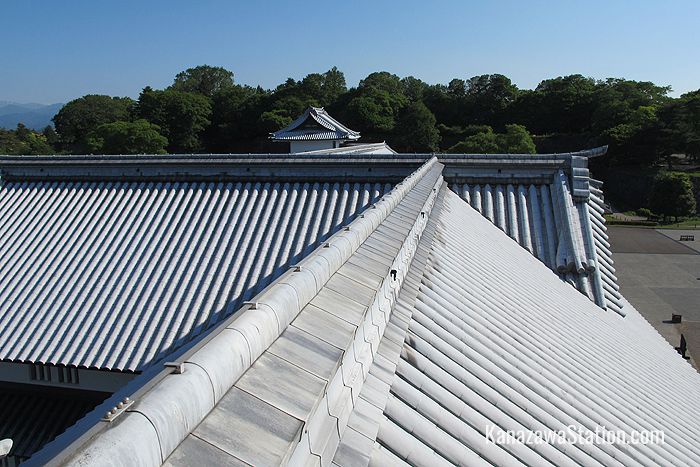 The roof tiles of the castle were made from lead. It was said these could be melted down for bullets if the castle was attacked! 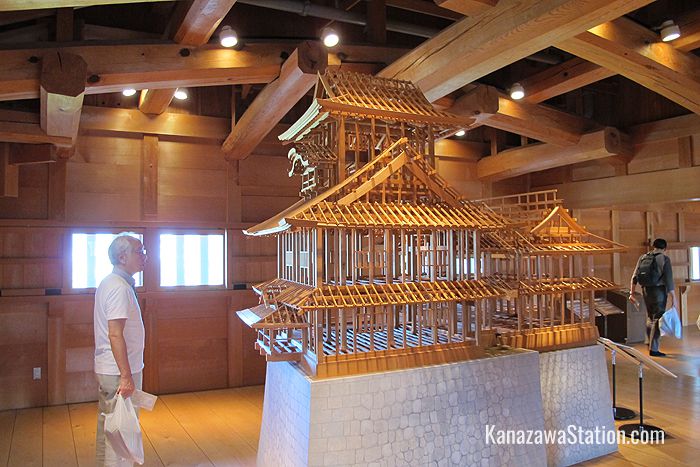 A scale model of the original structure. Models like this were used by carpenters to plan the reconstruction process 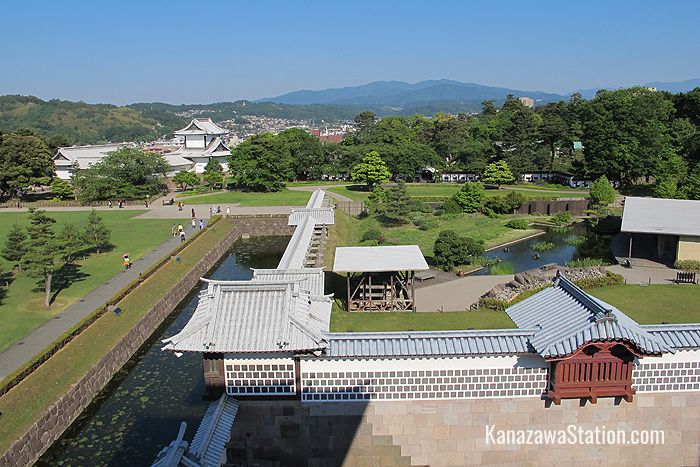 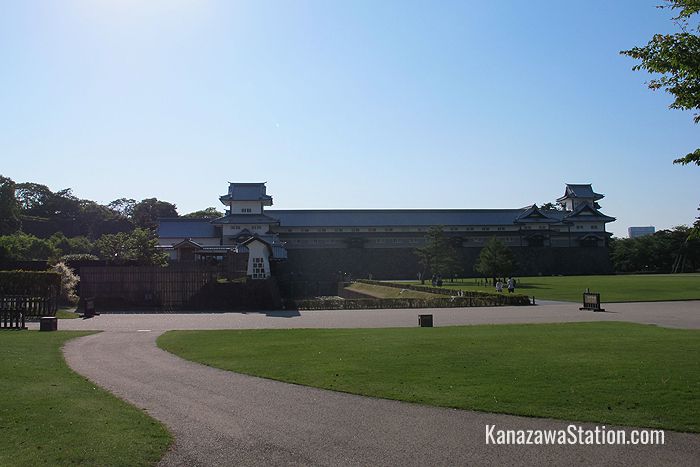