Kenrokuen is a gorgeous and expansive park-like garden in the center of Kanazawa and it is the city’s major attraction. Extending over almost 25 acres, it was once the outer garden of Kanazawa Castle, but was opened to the public in 1874. 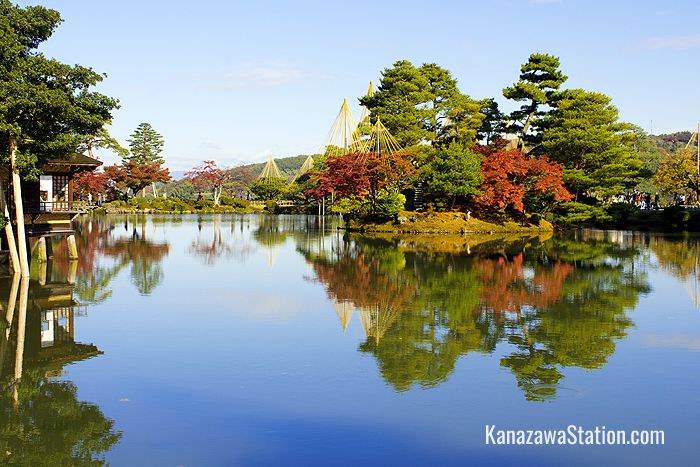 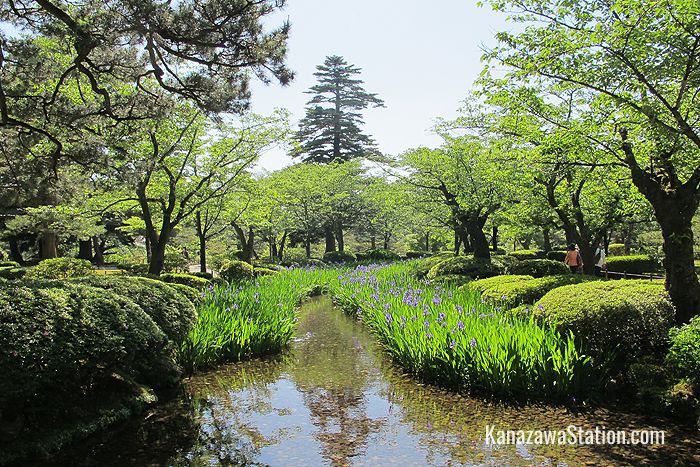 Irises in May seen from a flower viewing bridge

The garden was created by the ruling Maeda family over three centuries beginning in 1676 with a landscape garden called Renchitei. This garden was destroyed by fire in 1759, but was restored in 1774, and in 1822 the garden acquired its current name Kenrokuen. This name is sometimes translated as “garden of six elements”. Actually it refers to a classical Chinese poem that spoke of the six contrasting features for a truly outstanding garden. These essential elements are: extensive space and quiet seclusion, human artistry and old fashioned elegance, flowing water and distant views. According to the poem it is almost impossible to create a garden that holds all six elements in common. However, if you take a stroll through Kenrokuen, you can actually find them all. Below are just a few of the sights you can see in this amazing garden. 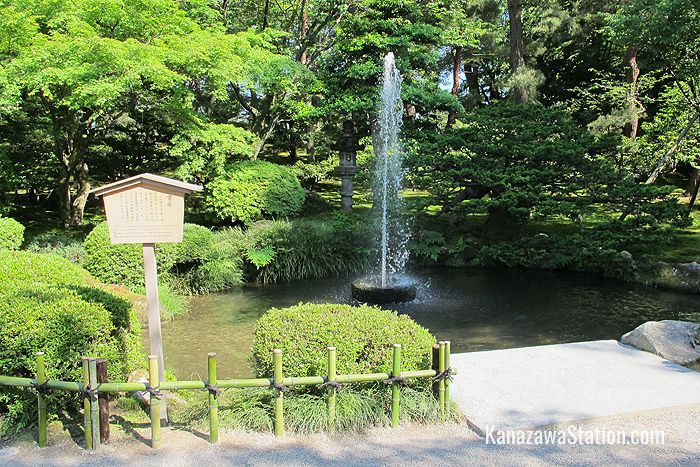 This fountain reaches a height of 3.5 meters

The garden boasts Japan’s oldest fountain which is powered by natural water pressure and happily combines two of the six traditional elements in one: human artistry and flowing water. 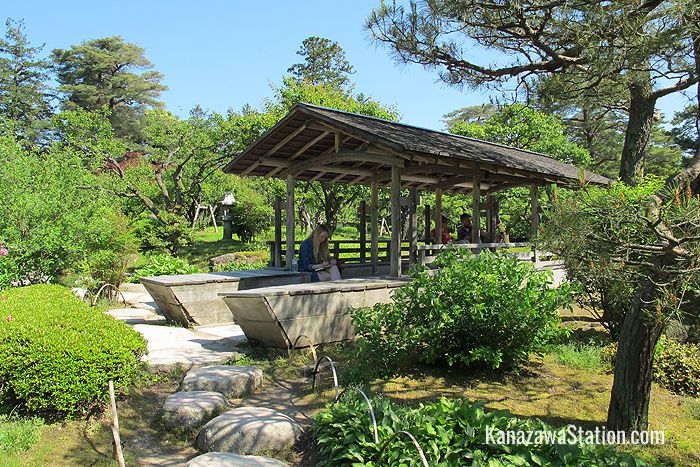 The natural rise and fall of the garden pathways will take you to both secluded resting points, and then suddenly open out to expansive views, like that over the Kasumigaike pond. 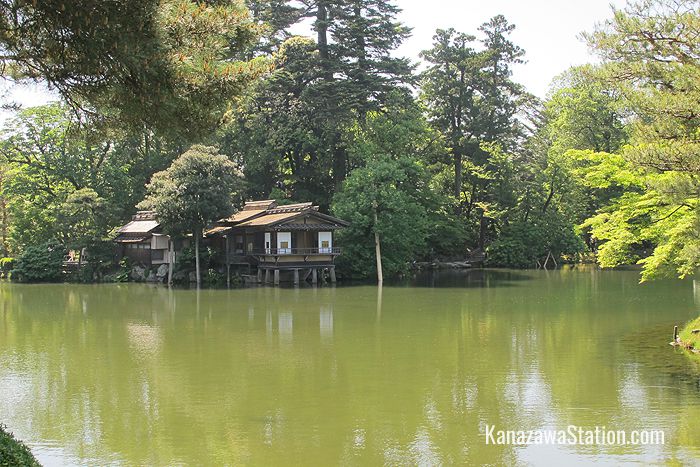 The “neagari matsu” or “raised roots pine” was planted by the 13th Lord Maeda Nariyasu. 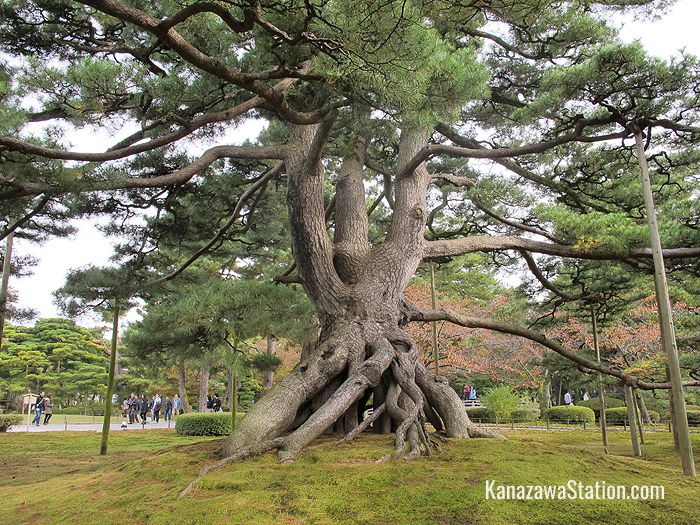 The dynamic form of the “neagari matsu” pine tree

The Yugao-tei tea house on the Hisagoike pond dates from 1774 and is the oldest building in the garden. 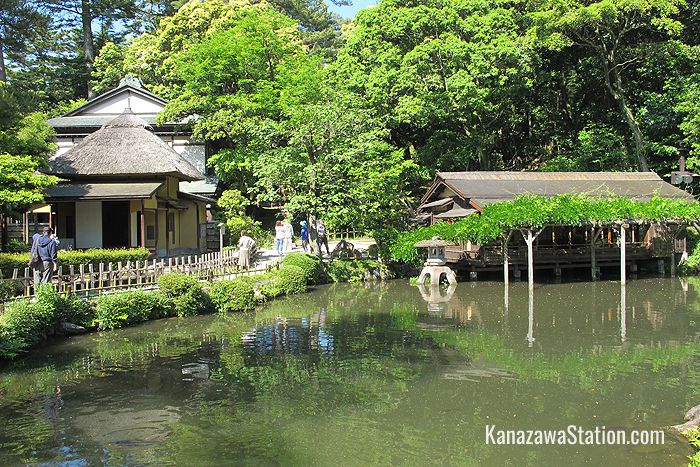 The haiku poet Matsuo Basho visited Kanazawa in 1689. A poem he wrote here is inscribed on a stone in his memory. The poem reads:

bright red burning
bitter sun…
but autumn in the wind 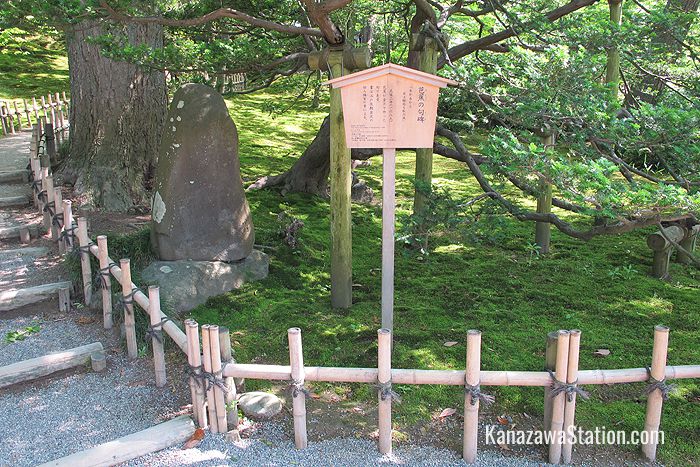 There is also a war memorial in the park. The Meiji Memorial was erected in 1880 to commemorate the deaths of 400 soldiers from Ishikawa Prefecture who died helping to suppress a rebellion in Kyushu. The statue is built in the shape of a mythical Japanese hero called Yamato Takeru who according to ancient legend also suppressed a rebellion in Kyushu. 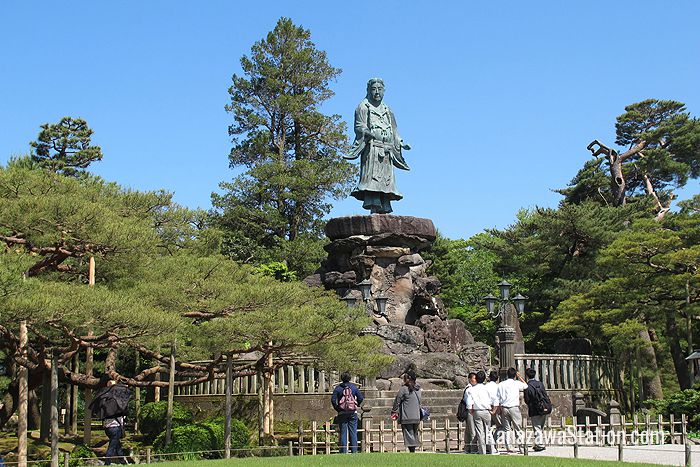 One tree bears the scars of another war. The hole in the pine tree’s surface dates from June 1945 when Japan was desperate for resources and turpentine was taken from trees to be used as fuel for planes. 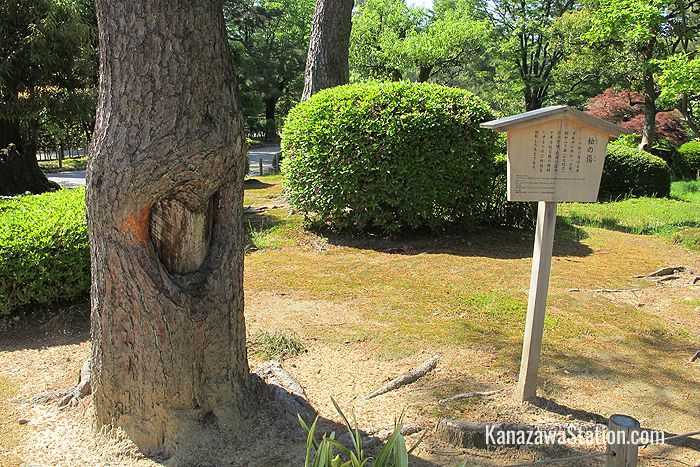 Happily the trees of Kenrokuen are better cared for these days. In winter the pine trees in the garden are protected with ropes that are tied in a cone shaped arrangement to prevent heavy snowfalls from breaking the branches. These protective ropes are called yukitsuri and are a famous winter sight of Kenrokuen . 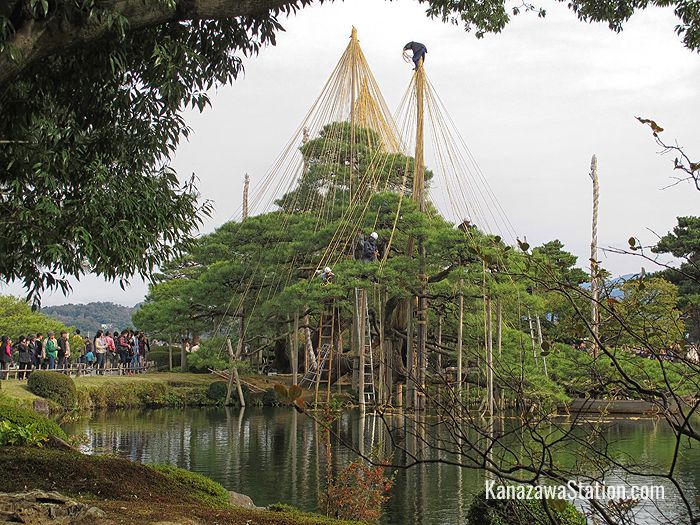 Workmen tying ropes around the trees in early November 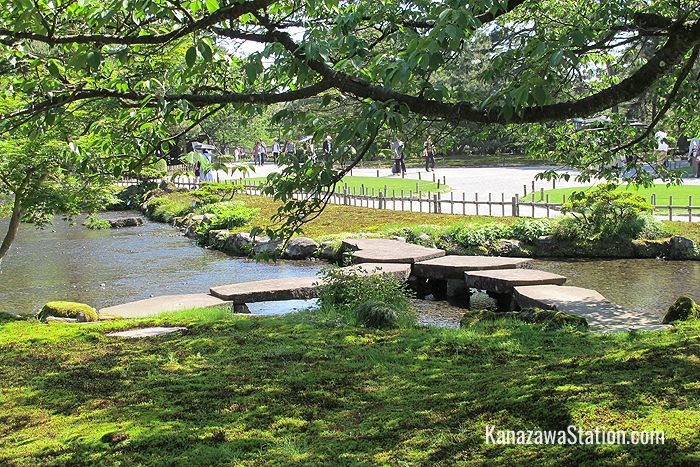 The “flying geese bridge” is shaped like a V

Kenrokuen is open 365 days a year.